This was an IWFS Dinner at the Dancing Fish in Bangsar. Good reports of the quality of the Indonesian food had set up reasonable expectations and we were not disappointed. Starting off with the Grant Burge Sparkiling Pinot Noir accompanied by Emping with Sambal Terasai, the Emping continued on the table with a Trimbach Gewurtztraminer. On its own the Trimbach was pleasant enough with its signature petrol and lychee finish but there was not really enough muscle to cut through the sambal. The neutralising effect of the wine on the spice made for an interesting experience, but not one that really merits writing about or repeating.

The satay chicken was one of the best I have ever tasted. Most satay tends to be tough and over marinated. This was melt in the mouth tender and enough marinade to taste but not overpower. Same with the peanut sauce - enough to taste without whacking the tongue into submission. Which made the accompanying St Clair SB a most pleasant accompanist with its still steel grassy dryness and texture and sleek crisp finish. 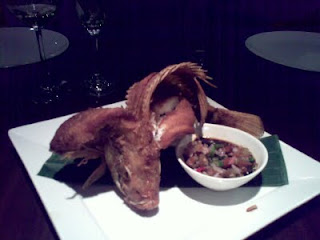 And then to the dish for which the restaurant was named - the Dancing Fish itself. This is essentially deep fried and crispy and arranged so the fish looks like it is dancing on the plate. It certainly danced in the mouth! Lovely texture and taste on the flesh with the added crunch of the coating. Paired with the Grosset Polish Hill Riesling, the full body of the wine made for a good partner to the dish. Three years in the bottle lent a mellow hint to the fruit, though the body remained full and the finish full and long with good acidity to cut through the slight oil of the fish. Excellent.

The conversation veered toward Keith Floyd and how he could polish off a bottle during a cooking sketch, and I was feeling similarly sloshed after all the white wine.
It was perhaps for this reason that the remainder of the evening was not memorable nor remembered. The wine was a Piedmont, the Malgra Galana Barbera d'Asti form 2004. We were also pretty full from the food by this point. Edna had the staff doggybag the crispy duck for take home. This I know because it was in the fridge for dinner the following night with our Ipoh Chicken Noodles. Paired with our Fridge wine the crisp and fruity Wolf Blass Eaglehawk Chardonnay from the supermarket, it was a bit on the dry side, both in texture and a kind of dry rendang coating, but pleasant nonetheless.
Posted by Brian Mack at 8:14 PM