I've not been a great fan of hotel restaurants. With only a few exceptions, they tend toward the general in an attempt to be all things to everyone and not offend the palate of Mr and Mrs Well Heeled. And for some reason, I have never struck lucky at EEST in The Westin. On the previous occasions I have dined there, there always seemed to be some shock either in the service or the bill which dented and pretty much killed the night. So it was with a bit of trepidation that we got invited to the EEST for what turned out to be a massive amount of Chinese food. My memory of EEST was a bit fusion and modern Japanese style, which I was never quite sure served which demographic in the market, so this apparent shift to Chinese style seemed to make economic sense.

Got there at 7.30pm and were shuttled to a private room with chintz cushions and overlooking the Pavilion. Everyone arrived and took their seats. It took a very long time for some food to come, at least 30 minutes before we saw some nuts to nibble on. After this, the food came quite quickly. 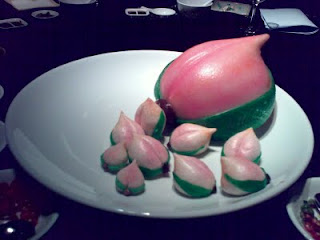 Started out with the sweet little lotus paste beans in the pod. I'm not sure of their significance, but they are necessary at Chinese birthday dinners and usually as a dessert. Not bad, not too sweet. Followed by Four Seasons (crispy fishroll, a cute taiwanese style dumpling and some unagi - fair) and into the pork knuckle and dumpling bread in sweet and sour sauce. Traditionally a northern Chinese dish eaten in the winter, this can be one of the best ways to enjoy the pig. I found this one a bit on the bland side. The sauce did not have enough fire in the mouth and did little to add to the meat. We normally have this at the excellent and consistent Pik Wah near Stadium Negara and it is always the business. Here it was only so-so. The Waipara Hills SB 2010 went well with all three courses to date, lean and crisp and fresh in the mouth with a clean finish. 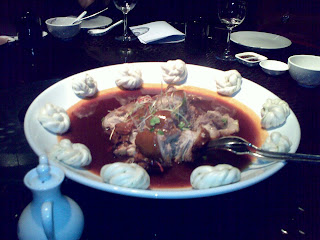 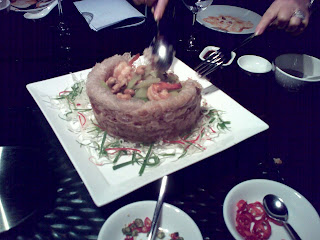 Next up was the Yam Cake with prawn and veggies (mostly celery and capsicum). I found the yam a bit on the stodgy side - it fell like a stone lump into the belly. Crisp celery and nuts and prawns in a light broth. Nice texture and good taste. The prawns were excellent. This was followed by a kind of Chicken Roulade topped with crisp fried chopped garlic. Texturally, this went well, with the garlic crunch and the soft chicken. Tastewise, again a bit bland, but hey, it's chicken!

We then had Kai Lan and garlic which was quite strangely sweet and soft shelled crab in batter (lovely!!) and finished off by the traditional longevity noodles to signify long life. The fruit platter was well laid out and varied - kiwi, guava, pear and dragonfruit. 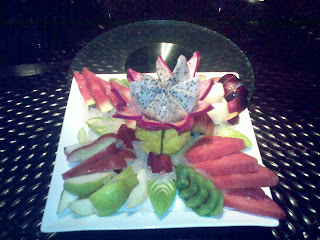 All of the above was being paired with Eaglehawk 2009 Red Blend and a Benchmark Merlot 2009. Reason was, the wine list at the EEST was a bit thin and felt overpriced - RM40 plus for a glass of supermarket plonk. Better to BYO and pay the RM60 corkage or just stick to warm water. Or pay for one and hide another bottle under the table. Both were a bit sweet and alcoholic, but the Merlot had some fruit. Will try and blend the remains of it with some young Chilean Cab.

As said, there was nothing wrong with the meal at the EEST. Individually, the dishes were well prepared and presented and collectively it made for a pleasant experience. It's just that there is so much BETTER Chinese food available at restaurants across the city. I have had so many great and outstanding meals in my time in KL - food that has fire and grip and taste and which makes you feel that you've had something really special. Didn't get that here. The surroundings and the location were outstanding, so maybe that would be the attraction of the EEST. The best food in KL is often in the funkiest of surroundings, in the backstreets and alleys. EEST is a good venue if you're looking to impress someone. If you want top end Chinese style food, though, our standby venues are Overseas on Imbi, Marco Polo on Raja Chulan or Pik Wah off Jalan Sultan.
Posted by Brian Mack at 8:18 PM