Burgundy and The French Riviera (2 of 12) - Paris and Beaune

My original choices for a dinner in Paris revolved around steak and frites. We like it and Paris is pretty much one of the best places in the world to find it. My research showed that Rue Marbeuf housed two of the best in the city, these being Le Relais de L'Entrecote du Relais (no 15) and Charbon Rouge (no 25). The first is total legend, with queues forming outside given the restaurant's policy of not taking reservations. The second offers steak from around the world and both offer fair value for a good chunk of ribeye. Sadly we did not get the chance to try, my choices being dismissed with a "you can get good steak at home." Which on one level was correct. Even so, there was a twinge of pining regret as we walked past both establishments on our way to the final choice of venue for the evening. Two shrines of steak on the same Rue. Next time.

The Minipalais was a newly refurbished eaterie in the Grand Palais museum setting. Recommended by old family friend Olivier on the sayso of a friend of a friend, it proved more than a shade disappointing. Fashion show music ambience, dim lighting, slow service, mediocre food, over priced and massively trendy. Pretty young things flitted around trying to be efficient and fluttery at the same time. Though the setting was brilliant - statues and other objets d'art littered the alcoves and walls. Table setting was pleasant and starchy white tablecloths are always good to see, We were both pretty determined to have a steak and ordered a Charolais rare. Rare proved pretty raw on this showing, as if the beef had been shown a toaster for a few seconds and declared cooked. Yes. The others had more unique food though I did not hear raving reports of the tastes. Well, at least we could now tell the world and its dog it had been done. Which perhaps is a good part of the reason for going in the first place - to be the first and set the trend, n'est-ce pas?

Recent reviews on the Tripadvisor seem a bit mixed over the food, though apparently lunch on the terrace is a dream view across the river. I think I was probably teed off at missing an opportunity for a darned good steak. Certainly was not in the mood for the more delicate offerings on the menu that night, which in retrospect look very tasty (www.minipalais.com). Maybe worth a return visit, but take a tour of the museum beforehand and do lunch preferably in Springtime. Cue for a song?

Whilst the others took a cab, I walked back with Steven and Vinita to disperse the underdone steak and to view Eiffel in all her lumiere glory and almost got lost in the dark back streets trying to find the Hotel Majestic where we were staying. It looked pretty clear on the map, but one quickly learns that Les Rues de Paris have offshoots of offshoots and it all gets a shade mazelike. But it was a good if somewhat chilly walk and you do get to see the night side of the city. Passed some poor soul huddled in a sleeping bag in an office doorway for the night and remembered a similar experience over thirty years ago trying to sleep in cardboard boxes behind a supermarket in Calais prior to getting a Ferry back to the UK the following day. Darn cold that one, even in July as it was. Didn't sleep much that night.

An uneventful and easy train ride brought us to Beaune station just before 5pm where we had to wait about 15 minutes for a taxi for a 15 minute drive to take us the ten minute walk to the hotel. Beaune is basically a town inside a ring road circle which you can drive through but is quicker to go around. So a ten minute walk became a fifteen minute drive. And the ring road was a one way which naturally went the opposite direction to the way we needed. Welcome to France.

Got installed at the hotel at about 6pm so there was just enough time to shower and wash some clothes ahead of our 7.30pm dinner. The Ibis Styles hotel on the boulevard Perpreuil was a clean no-nonsense type of hotel, white with bold colours in the breakfast area and with roomy rooms with a TV, shower and a big bed with a heater so our clothes could dry quickly. There was a long table and sofa to park the suitcase without really needing to unpack. Living out of the suitcase seems to come quite easily to me. It would be our new home for the next three nights and it would prove most comfortable and convenient. Quite impressed and quite pleasantly surprised - we have since stayed at a number of Ibis hotels in France and elsewhere. We like the simplicity and efficiency of the chain - clean, fair value and no frills. We are definitely fans.

As said, dinner was 7.30pm at Les Caveau des Arches which was a somewhat wet and rainy two minute walk across the road from the Ibis Styles hotel. An unassuming entrance led to a downstairs cavern of painted bricks of what was presumably a wine cellar in a previous 17th Century life. A very pleasant ambience, we were sat Chinese style around a round table. I have little memory of the food though I do seem to remember sucking up Lenglui's Escargot garlic butter with the delightful bread. That's me - give me bead with salty herbed butter and garlic and I am like a pig in mud. I think I had the fish, a Sea Bream as I remember because we don't get this kind of fish too often in KL. It was pleasant enough, but didn't sear into the memory. Maybe we were tired. Certainly too tired to take photos and write about the food. But we cleared most of the plates. Good wines, though. Having good wines with the meals would prove a hallmark of the trip - there would barely be one that did not go well with the table fare. The reviews say it is good, and the website photos of the dishes are magnificent so I shall have to return one day and make decent notes on the food.

We caught a lucky break for dinner. Lorraine had already booked the Bistro de L' Hotel for eight for dinner but it had somewhere been decided to not go there. Fortune would have it that she had omitted to advised the restaurant. Lance had a yearning for steak and chips and had gone to the Bistro only to be told it was fully booked. At this point Lorraine realised that the booking might ours, she checked and found it was and so we were back on to dine there at 8pm. Just as well we did, it proved one of the gastronomic delights of the entire trip. The steak frites for two was off the map. The perfectly seared Angus with duck fat fried new potatoes was stellar. We saw what else the tiny kitchen was dishing out and our mouths just fell. The Bresse Chicken was carved off the bone at the tables and looked so succulent; the salt baked fish looked equally amazing. They were serving an amazing amount of food for a place that was desperately small and ageing. But that made for the charm, being cramped around a table sharing our food with each other and chugging some tasty local red. It had that ageless feel about it, the town hotel that serves good honest food for those on a venture across the land. A definite must do for the soul foodies and definitely one to come back to.

This was a hotel we stopped at as part of an organised tour around the vineyards and countryside of the Burgundy area. We caught it during a brilliant sunny day, total contrast to the hailstorms of previous weeks which had swept through the valley and decimated much of the precious grapes. We saw first hand what they had done to the vines. They were shredded. Bits of grape hanging off the stem, wounded beyond redemption. It was pitiful. Estimates were that up to 90% of the crop had gone in Beaune, Pommard and Volnay. The rest had fared somewhat better. Sad.

Our tour hostess Cristina had given us a very informative two hour tasting and seminar at the Hotel de Dieu in town which helped understand Burgundy wines a whole lot better. They follow the land and the producer. The higher up the slope that the parcel of vines is located then the greater the Cru, and the village near which the vineyard is located also adds to the name. I think. And the icing on the label is the name of the parcel in which the grapes are grown. Some parcels enjoy a better microclimate and add intensity to the final wine. I think. The wines we tasted were very nice - crisp easy Chablis right through to complex Grand Cru Montrachet.

Le Montrachet is a two star restaurant and was a charmer in the late summer lunchtime light - airy, with a light breezy charm, we sat down for what was a delightful lunch full of textured food and lots of very good white wine.  A lazy two hours followed by a stroll in the grounds. Every lunch should be like this. 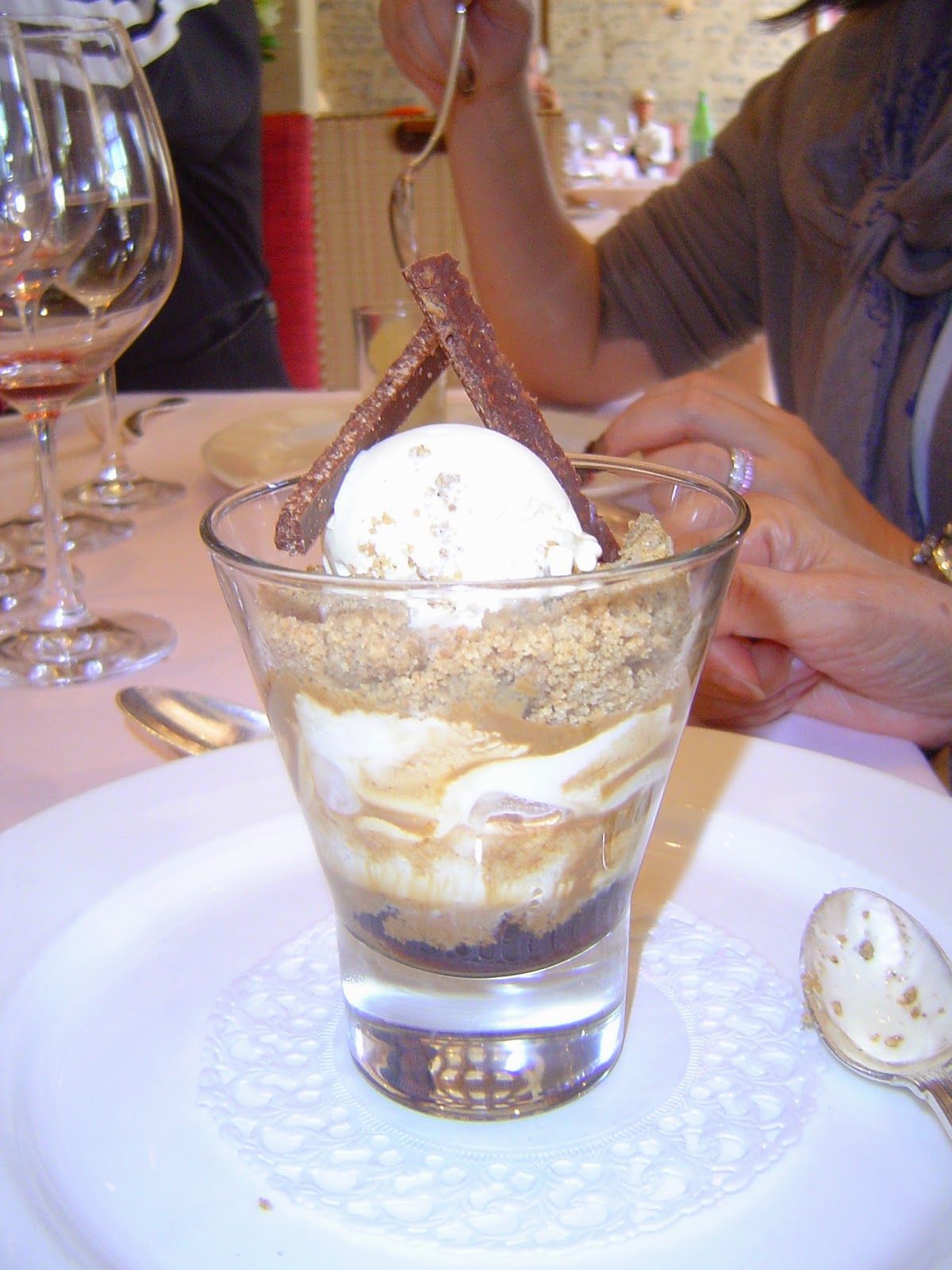 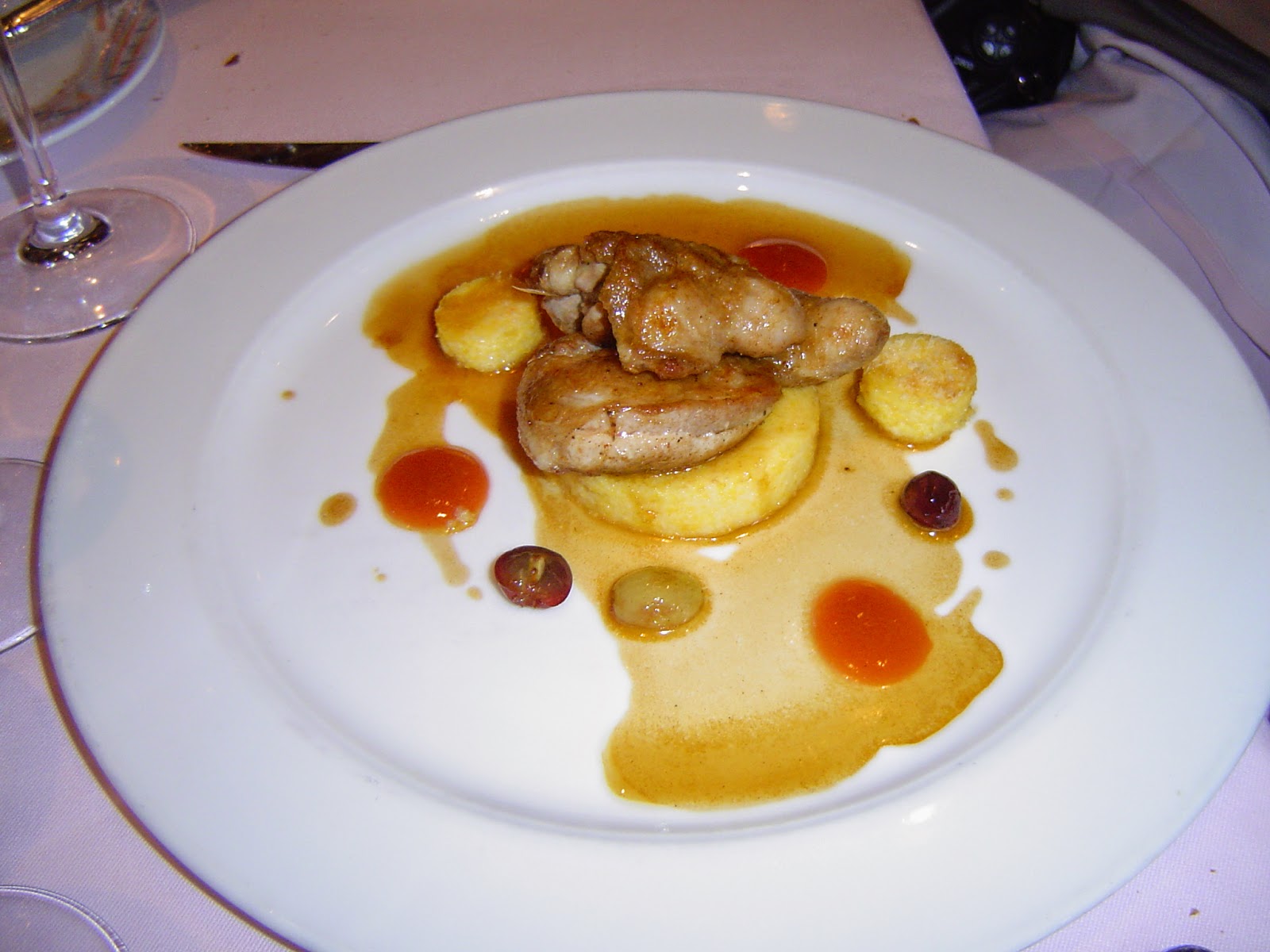 After lunch, we headed north with destination being the DRC vines. A quick stop on the way at some map and straight to the vines that produce the wine few of us will ever be blessed enough to sip, let alone buy. Photos of us at the all hallowed spot of vineyard were essential and taken. It was quite desolate, though a few hardy walkers and cyclists were in evidence. Outside of this, we were alone. The vines were left pretty much to themselves. We then headed off for a tasting at the Domaine Gros winery in Vosne-Romanee where we bought up a couple of Grands Echezeaux for keeping for a special occasion at a fair winery price and headed off to a museum to end the tour. Quick drive back to the hotel to shower and change for dinner at Ma Cuisine. This proved a bit disappointing. That's what expectations can do to you. The Charolais beef was tender of texture but a shade too rare for personal taste. The rest of the food was pretty forgettable, and yet all the webbies praise it up to the skies. Perhaps our delightful lunch in the pristine Montrachet was still playing in our heads and the way more rustic charm of Ma Cuisine was a different prospect that didn't quite dovetail in a gastronomic sense. None of the others in the group had much to say about the meal. Lance headed back to L'Hotel de Beaune to see if he could snag some final chicken. We went back to pack and sleep. So ended much of our time in Beaune. Nice memories and a hope to return.