Burgundy and The French Riviera (9 of 12) - Robuchon Monte Carlo

For this one I surprisingly had notes.

We had driven directly from St Paul to Monaco and the GPS did brilliant work in getting us straight to our hotel. We had opted to stay at the better value Novotel perched on the Monte Carlo hill which made for a gentle downhill stroll into the main Casino and swish hotels part of town. Notwithstanding vague plans to meet for lunch, these didn;t happen so we had pizza and salad before doing the Hop On Hop Off bus tour around the town. Little bit confusing as to where the stops were until we spotted a bus pulling up on the road. It was full but another came quite quickly. The secret to these is not to Hop Off at the not so interesting places because the bus gets so full that you can't Hop back on. Darn hot, too. No joke to be stood waiting for a bus that you can't board. Tempers get a bit frayed, but the bus driver was typical French - shrug the shoulder and say yoo wait for ze next one or walk, yoo can chooze. We did not hop off until we did the full round. The place is lots of narrow roads and full of traffic. We saw the famous bits where the F1 cars zoom around and through which was quite fun. Thankfully the Hop On driver had few apparent ambitions to emulate Schumacher or Button. Some great vistas of opulence and yachts on the routes. The place oozes wealth in all its beauty and ugliness. Wealth buys pretty things and people but is often owned by the unbearably ugly and vicious. This became apparent when we got to the casino later in the evening. But jumping the gun here.

Got back to the hotel where Lenglui took a nap and I took a coffee at the very relaxing bar area. Back for shower and change ahead of dinner booked at the Joel Robuchon Restaurant in the Hotel Metropole. An easy walk to the Hotel along the main street and through a Park and we were there. The driveway of the hotel was lined with bigass cars of varying pedigrees, so Lenglui and friends naturally posed for a quick shot.

The others had opted to actually stay at the Hotel Metropole so as to be able to get ready and be smack on time for the dinner. Nope. We were spot on time and waited about 15 minutes for them to join, which gave me a chance to stroll around the bar area. We parked with a cocktail and I took some photos.  Very French and opulent, with ornate statues and plush seating and drapes that felt like they would swallow you whole if you got too near them. The stuff of nightmares to a young child like me.

We got joined by the others and got escorted to our round table by the main window. This is a large restaurant, roomy yet a great feeling of exclusivity despite the bigness. It was a darkish affair, though we had been given a large round table near the window and right next to the dessert wagon which looked delightful. With the menus in front of us all, everyone started talking about going individual, but when Lenglui and I opted for the Discovery degustation everyone seemed to fall into line behind us quite quickly. Well, you're here maybe once so go for a taste of what the restaurant thinks is its best, yes? Oui. So that was that.

Amuse Bouche - no idea what it was but it slipped down with a salty bite. The first course French Beans had liberal sprinkling of what felt like parmesan which, with the caviar, gave a chewy firm salt on the beans and the hint of virgin oil made for a very delicate and refined sensation. Soaking up the caviar oil with the olive bread was total bliss, blitzing the tongue tip with salt zap and carbo oil squeezy suck. It was a cracker with the Premier Cru Chablis that had been ordered to start us off. Should have got shots of the wine labels, but sometimes the food and the company is so good. You can't cover everything, eh?

The Avocado and Lobster was a firm creamy bite of beautiful and superbly fresh seafood but with a spicy kick and suggestive of a splash of chili oil. Maitre'd later confided that it was in fact a charge of raw horseradish that gave the ensemble its fresh kick and electric zap on the tongue. This is the genius we pay for. Superb.

Foie Gras was of excellent quality, with the Apricot giving a sugar honey foundation as would a good Sauternes but at a snip of the cost. Must remember this next time Foie Gras comes our way. Ask for Apricots. The Amaretto gave an alcoholic boost and the whole combo kind of leaked and slid its way slowly down the throat. Superb again.

The Purple Artichoke felt like an overdose of mushroom in the mouth, though the chorizo gave a nice fat spicy spike to what was initially quite a bland dish. However, once the squid kicked in and with the chorizo body, it all came together like a fat spicy oily greasy coating in the mouth with a fresh mushroom crunch over Spanish Salami chew. Lots of this style of food seems to want to offer contrasts that either blend with each other or whack each other up in the sensation stakes. This one was a pleasant blend, giving a full mouth though not doing much for the remains of the Chablis.

Wine wise, I have neither detail nor photographs. My notes say the first white was light and fruity, young and crisp The second white had more body and complexity, with apricots on the mouth and spice on the nose. A Premier Cru from Savigny Sur Mer, possibly. The first red gave off toasty oak with good acidity with crisp tannins and low sugar. Possibly a Premier Cru from Savigny Le Beaune. Very tasty, this one - meaty, good spice and chewy tannins. Also got a bit of minerality and steel in the fruit - not made in oak maybe? Heresy…

The Sea Bass came out fried with a good crispy skin. On paper, this should have been a standard fish broth with beans but the addition of the chorizo made for an odd partner. In this, the bland Balotti beans kind of cancelled out the spice of the chorizo, though the contrast against the fish made for interesting sensations. Spicy fish oil but fatty and textured. New as this was, it didn't quite stun the palate. The broth was pleasant enough on its own and with the bread.

My notes say the lamb cutlets were unbelievable. Tender and perfectly cooked, with firm bite in the mouth and a little crisp on the bone for taste. Oh my freaking god.

The mashed potato had been built up as the stuff of legend, it being claimed by the world to be the best in the, er, world. Mine was very creamy and moist with an insane amount of butter. Metling in the mouth, rich and creamy, though perhaps I missed it. The texture was too perfect, too refined. We Welsh boys like a bit of potato in our mash and the poor dears in this mash had been blended pretty much out of existence. Some raved over it, others barely batted an eyelid. Nevertheless, an unforgettable sensation. Like sucking whipped mashed butter through a straw. Maybe an acquired taste.

However, when the whole combo came together the result was sensational. The ensemble of the lamb, the garlic, the plancha, the sprig of thyme and the jus was totally delightful and amazing. Possibly the dish of the tour.

There was a great lemon zip on the dessert - good fresh fruit and low sugar. The texture with the Limoncello jelly was cute, lots of zippy citrus and doing a good job of waking up the mouth. The addition of a mint leaf on the strawberry helped it all work like a sorbet refreshing the mouth and palate, though probably one or two dishes too late. 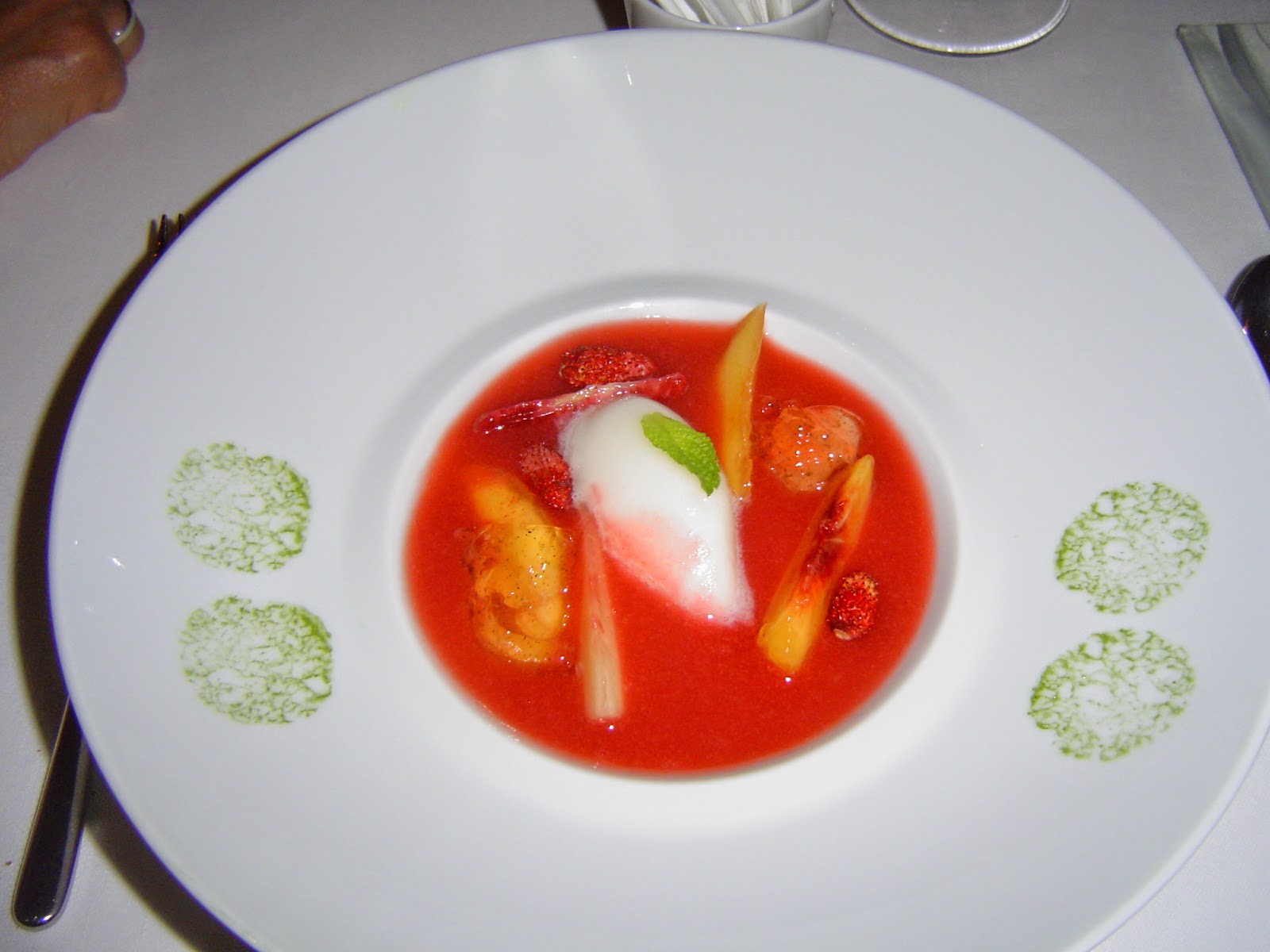 The second dessert was a wild and fruity ensemble exploding ensemble of chocolate and cream and berries with some pistachio helping make for a good crunchy luxurious bite. The chocolate was amazing, rich pure cocoa and not at all sweet. And pairing with raspberry was brilliant, with the sharp sour zap giving the cocoa that bitter quality and setting things up perfectly for the coffee to follow.

The service was pleasant, quiet and efficient and wonderfully non obtrusive. There when needed, but subdued and easy. Most excellent, one of the best service experiences ever. But then I guess that is part of what one pays for. In a previous life, I would never have dreamt of going to these places. But now I understand the food and wine and ambience and service combination a little more, I get why these places can charge what they do. The tastes and textures are subtle and charming, the service brisk and seamless, and the wine and setting underline and punctuate the entire process. Traditional western cuisine and service at its best. One of the meals of my life. If you get the chance, don't think - just go there and do it.

After dinner we strolled in the Monaco evening air and found ourselves heading for the casino. A flash of the passport and we were in. Bathroom stop and while waiting for Lenglui there was this girl next to me shaking. "Are you cold?" I asked in French. "No, I'm terrified," she replied in a London accent. I faked nonunderstanding and quickly walked away - thoughts of fierce Russian yobs with firearms looking to target practice. Not very chivalrous, but the gut said discretion was the better part of valour here. Bit scary.

The Casino is old school opulent gold and large walls. Mostly quiet as well, with some clearly private areas for the high rollers. Others were gathered around roulette and Blackjack tables and most were doing a brisk trade. We didn't stop long - neither of us are gamblers so we were not particularly interested to punt. Just to have gone in and gawped at the punters and strike it from the bucket list. Ho hum. Note - gents take a jacket and a tie.

Gentle stroll back to the hotel to walk off the coffee and sleep. Didn't work. Didn't sleep.

The following are some shots from a visit to the Villa & Jardins Ephrussi de Rothschild at Saint-Jean-Cap-Ferrat en route back to St Paul from Eze. Very pretty layouts, though we were being rushed around our visit due to a wedding that was to take place there so we didn't get too much of a chance to enjoy it. Bloody French.