Prior to the two month sojourn around Wales, France and Sicily across August through to mid October, I had been a bit taken up with a project that took me away from the food and wine writing (and the songwriting and recording) but I then got a bit of a breather to try and reflect over where the Lengui and I had eaten over the previous couple of months (well, seven actually). So I figured rather than try to document them individually, better to just load them all into a single narrative and see how it looked. So this is a full-ish listing of where, when, and with whom we ate and drank over this period. Some are barely one liners, others have a bit more detail. Whatever, it made for a more than usually long read so it got broken down into months for ease of, er, digestion. Not sure if it will prove useful, but when taken in total it does represent quite a litany of gluttony. Phoooooooo....

Feb 1st Marco Polo Loh Sang with the House of Pork
This is a group who loves to eat the Pork in all its forms and glory. A great need was felt to ring in the Year of the Rooster with the Siew Yoke and Suckling Pig. And other porky delights. Chinese restaurants around New Year time traditionally see the quality dip due to staff going back to home towns. Didn't see it here. Whatever, the quality of the company and the booze will always compensate.

Feb 9th Bonfire Opening
The Chef daughter of one of Lenglui's Mah Johngg kaki opened this place. Is a kind of Australian theme with big meats and yabbie bugs and grills to the fore. Good tucker. The mashed potato gratin was magnificent. They charge corkage. Service and glassware is good. Can't remember being stunned by the food, but was not underwhelmed either. Good for families - Starling Mall seems to draw a younger crowd anyway. Given its outskirts location, it has taken off very well; the times we have been there it has been buzzing (see below). Worth a visit, not sure I would return - prefer to go to more porky places.
(NB another sibling operates the Red Bean Bag in Publika whilst another does the Yellow Brick Road in Damansara. The food genes are clearly strong in this family).


Photos of the Barramundi Snapper and the remains of the roasts - lamb, steak and chicken, all of which were well tasty. Can't format the captions for some reason... 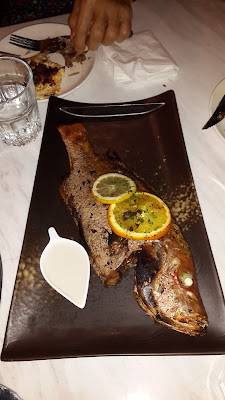 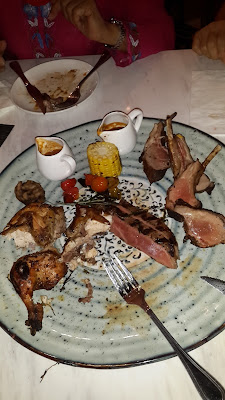 Feb 11th - The Kiwi's Birthday
Got instructed to be at some out of the way place in Taipan USJ to celebrate the Kiwi's Beatle Birthday ("When I'm 64") and quite a repast it would prove to be. Seems he is a regular here and chef and team went out of their way to prepare some excellent continental style dishes. Can't remember much about it, except we went back to his place for more booze and party. Seem to remember getting hypnotised byTibetan Throat Singing. Or was it snoring? Very nasal. Have to dig out the name of the restaurant.

Left: Doc Wine with the Wine Daddy     Right: Doc Wine and his Squeeze 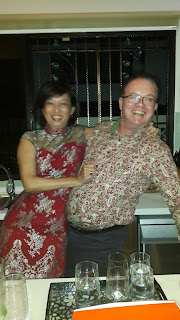 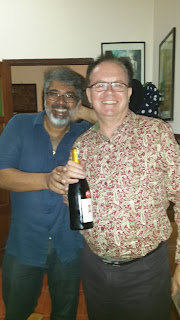 Feb 15th Tang Room - Chinese restaurant Starling Mall with the Birthday gang
Came here on a recommendation that the food was very good. Well, and maybe - didn't do it for me. Forgettable and bland. We got a room to ourselves but it was still massive noisy from a party doing the Yam Seng all night in the main room. Fair glassware, no corkage, forgettable food. I also lost my car park ticket which didn't help the mood; the presence of the wineless Comedian also didn't help. Perhaps I should give it another shot. Found a half decent CdP at RM104 from the wine store downstairs next to the very well stocked and airy Village Grocer Supermarket which proved somewhat light yet sleek. Also the Oyster Bay at RM78 which we socked away for our Marco evenings - belter with the Four Seasons starters. Toilet was outside and a hike along the Mall to the end.

Feb 16th Kame Sushi Atria with IWFS
The new second outlet buried deep somewhere in Petaling Jaya, 30 of us enjoyed fizz and excellent wines with chef's Omakase. Can't remember much about the food. Some felt a bit disappointed at the sizes of some of the dishes. I also felt hungry at the end of it all. I seem to recall someone opened a bottle of gold flake sake which was apparently a pure rarity. Someone else opened more champagne. Pretty boozy night.

Very tight space for the troops, felt massively cramped. Toilet was outside and around the corner, had to fight to get both out and back into the restaurant and the seat. Lots of laughter, not sure would return in such a big group.
Menu
Appetizer - Sugar Tomato (Fruits Tomato from Japan)
Sashimi - Oyster Sashimi with salt and Sudachi (Japanese Lime), Hirame (Flounder) Sashimi with Ponzu Vinegar
Grilled Dish - Grilled Sawara (Spanish Mackarel) with Special Sauce
Simmered Dish - Simmered Radish with grilled Monkfish Liver
Sushi (8 pcs & Half Roll) - Tuna Belly, Yellow Tail, Sweet Shrimp, Squid, Salmon Roe, Ginger Flower, Eggplant, Turnip, Tuna Roll
Miso Soup
Fruits from Japan
Feb 18th Marco Pig Nick with Gan family
Ah, the Marco Pig Nick…  whenever Lenglui tells friends about this, they all want to come and try. So naturally we have to be there with them. The usual menu, the usual mumbles of "ho seck" as the Pig Soup gets slurped, lots of "cheers" to fine champagne and Cloudy Bay SB. Some half decent wines on show tonight, can't remember what they were. Lot of talk about what to see in India given an upcoming visit there by myself and lenglui. The advice was to fly everywhere. Which in retrospect was good. The India roads would prove mental.

Feb 23rd Checkers Boys Night
I have been coming here for over twenty years. Owner and chef Mr Tan started out mastering the art of pizzas and quickly moved to pork. His pork ribs are magnificent and still the standard - juicy, tender, and big. His accompanying mustard salsa is heaven. On this night we shared starters and ribs and a knuckle or three with big ass Reds and a couple of standard start-the-night NZ SBs. Boys Nights tend to be…  boyish, I suppose. Quite civilised, little swearing, mostly swapping news about IMDB and Pink Diamonds. Or is it Sapphires?

Feb 25th Chambers Steak KL Hilton
Chambers has proven consistent in its quality and cooking of decent prime steak. We figured that we would not get any good meat in India so figured to satisfy the tastebuds ahead. We decided to try the Porterhouse to share and brought an Alion 2011 for the occasion. Should have stuck with the Ribeye - the T-Bone felt a bit firm on the night. The Alion 2011 was delightful, all silk and power. Lovely.
Feb 26th to March 2nd - IWFS in India
This was a six day event which probably needs more than a few lines. Did New Delhi (four nights), Agra (two nights), and Jaipur (two nights). Very intensive. And intense. Traffic was madness. Spent half the trip on a bus or in a car. Some great hotels and restaurants and food and wine pairings. And the Taj Mahal seared the memory and the soul. But such a mass of seething humanity, and most of it insanely poor. Never again. Senses feel they have been assaulted enough for one lifetime.
Posted by Brian Mack at 10:02 PM