Prior to the two month sojourn around Wales, France and Sicily across August through to mid October, I had been a bit taken up with a project that took me away from the food and wine writing (and the songwriting and recording) but I then got a bit of a breather to try and reflect over where the Lengui and I had eaten over the previous couple of months (well, seven actually). So I figured rather than try to document them individually, better to just load them all into a single narrative and see how it looked. So this is a full-ish listing of where, when, and with whom we ate and drank over this period. Some are barely one liners, others have a bit more detail. Whatever, it made for a more than usually long read so it got broken down into months for ease of, er, digestion. Not sure if it will prove useful, but when taken in total it does represent quite a litany of gluttony. Phoooooooo....

Jan 2nd Marco Polo friend's 50th Anniversary
Start the New Year as we mean to go on with good food and friends at the Marco Polo. Lots of boozing, singing and dancing. I was emcee. Apparently. Seem to remember kicking things off, then someone else taking charge. Which is fine - never get in the way of someone who wants to do your work. Fish was the standout, kitchen seemed a bit stretched.

Jan 8th Pik Wah with Tai Chi and a Roast Pig
The Pik Wah Restaurant is the default for the Tai Chi group to which Lenglui belongs and they decided to haul a Roast Pig to be carved up for the group. Located opposite the Methodist Church just up from Petaling Street in KL, we have been coming here for years and has always been good food. Can't remember the menu on this night, but the standards would have been here - the pork ribs, the prawns and the Soon Hock fish are always very good. The Karaoke singing not always so…  Roast Pigs and boozy nights with this group are always fun. No corkage on wines, but best to bring glasses. Solid food.
Jan 19th Uovo with Birthday Group
We had been here a few times previously thanks to Hustler who seems always to be well ahead of food curves here in KL. The owner also operates From Farm To Plate just up the road. Uovo is more uptown in its degustation serving, but the meat is exceptionally good - iberico ribs and wagyu beef. Service is excellent, no corkage on wines, good glassware. Not cheap but not unreasonable given what you get.

Jan 22nd Uovo for my birthday
As above but with way more booze and food. And my portable Karaoke. And lots of sparkling wine. And cakes. Raucous. 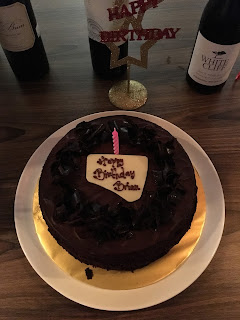