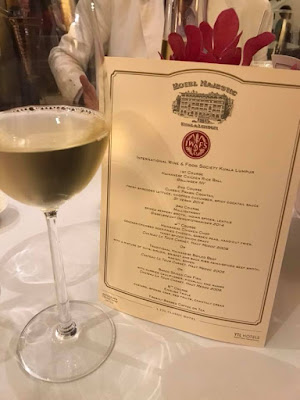 This was a beano to welcome fellow IWFS Members on a jolly from their Roponggi branch in Tokyo. The Committee thought to give a taste of "Old Malaya" to our guests and had put together a welcome dinner at the Colonial Cafe at the Majestic Hotel to be followed by Curry Tiffin and Pink Gin lunch on the morrow at the Lima Blas estate near Slim River before onward to Ipoh for a seafood dinner and Sunday lunch. I opted against this weekender - it looked hugely boozy and I had a clashing event in KL. Which ended up equally boozy. Sometimes you just can't win, eh?

As suggested above, the Colonial Cafe at The Majestic was selected given its historical significance and its presentations of Colonial Cuisine. Historical interest also drove the selection of the Lima Blas Estate visit, whilst the Ipoh choices were to offer our Roponggi friends a taste of good solid seafood Malaysian style.

The Restaurant blurb explained the concept behind the Cafe as offering a taste of "Colonial Cuisine" to patrons. It sees this as the result of Hainanese cooking techniques and local ingredients being applied in attempts to recreate British staples for the British expatriate employers of Hainanese migrants to what was then British Malaya. The story goes that Hainanese Chinese came a bit too late to gain a foothold in the mature tin and rubber industries and could only find work in kitchens. "The result was a unique and innovative culinary translation. Colonial Cuisine took traditional British staples and turned them on their head with traditional Asian cooking styles and exotic local flavours. In the same spirit, the Majestic Hotel Kuala Lumpur presents our Hainanese Chefs' own re-interpretation of these classics." In this, the kitchen is apparently presided over by the Majestic Wing's patriarch, Ah Mai, which the blurb says translates to the respectful term of "Auntie" in Hainanese. With the presumed implication that Auntie should be able to cook, yes? Yes. So. Ah?

The evening didn't start too well - driving up to the Majestic, we got very pleasantly told by a Pith Helmeted chap of South Indian descent at the front entrance that there was no parking and we would have to go around the back of somewhere and walk back. Many cars were already parked on the somewhat dangerous roadside, given the speed with which KL's finest were driving past. Given the two Lengui in the car, I opted to jockey at a whacking RM40.

The reception area was heaving with people looking to either go somewhere or looking to get recognised. There were clearly other functions going on across the building. The noise was immense, echoing all around the room. We found the lift and got to the somewhat more reserved area that was the Colonial Cafe. Initial impression was old and reserved and quite grand. The IWFS group was milling around the bar where the Bolly was getting poured. I did a scrum down and grabbed a couple of generous pourings from our bar friend before going off to check the tables. The staff had made out name cards which had been placed exactly acccording to my layout. Which I must say impressed me - it was unasked for but became a thoughtful touch.

It was also good to see some of the longer term members coming out to support and meet up with our Roponggi friends - they all had been hugely generous to IWFS KL on our visit there in 2014 (click here to read my reports on this visit) and this reciprocal gesture by some of those who had made that journey was warming. President David made a speech of welcome recognising this and we got seated for the off.

The wines were splendid. as was the company. The ambience was good - quite nicely big and airy and cutely "colonial" with its wood and floor tiling. Though the sofa style seats along the wall irritated. I am not a fan of sofa seating in restaurants - the back can never feel firm enough with only a cushion between it and the back. I don't like to sit and beg whilst I am eating, which I had to do tonight.

Foodwise….  I suppose I enjoyed it. Bread was soft and the butter was good standard. The Chicken Rice ball was a tasty opener, the fresh Prawn cocktail reminded of childhood at Butlins seaside resorts. The Mulligatawny was awful - felt like shredded chicken in thin murky green spiced gravy. My fish was well cooked and fresh and tasty and my trifle was light and fluffy and tasting as I remember it from the stuff we would get out of a box from the local supermarket at home in Cardiff. The mains were slow in coming out (the kitchen delivered all of the fish, then all of the beef and then all of the chicken). I did taste the chicken chop - felt a bit sludgy and not very pleasant to eat. Service was youthful and plentiful, though the hospitality experts in our group said they were far from impressed with it. I guess they should know, eh?

Matching wise - it sort of worked. The Bolly with the rice ball got its bubbles kicked into gear to clean the slight gunk at the back of the throat, the floral and buttery Chablis evened out the slight pepper in the sauce, the perfumed Gewurtz stood up well to the broth, and the Bordeaux was a surprisingly good match with the fish - a somewhat milder presentation of the Medoc whose fleshy fruit gave good support to the texture of the fresh fish. The 2005 is a lively and lovely Bordeaux vintage - can't recall ever having had a bad bottle from this year.

But tastewise it all felt a bit too ordinary for the price. My position has become that I don't mind to fork out where the standard of food, wine and service is worth the money. I increasingly find myself driven by a value metric, and if the standard matches the price demanded then fair enough. If one is paying top dollar then one should get top dollar standard. It didn't feel like it on this showing. Far from it. It was probably that Mulligatawny - brought the whole thing down. We had recently had a Mulligatawny at a friend's home over the New Year and it was magnificent - fire, taste, substance, spice; the works. Not sure whose version was closer to the original, but the Majestic version was pretty grim in comparison.

One of the Members asked whether we had had a food tasting and I had to confess no - we were a bit rushed in putting the concept together to visit the place. Someone else remarked that the food standard was not wholly unexpected - the outlets at other establishments operated by the owners can be variable. Well, and yes - I get it that hotels need to cater to a wide range of salt and spice tolerances. Though indeed, I am one who has tried the various food outlets at the other operations and found little there to command my returning to them.

And I now can add the Majestic to that list - the food standard did not warrant the price payable for my wallet. I get it that it is one of THE places at the moment and that many people are clamouring to get turned away by the little Pith Helmeted man at the front gate.

But seriously, if you can't park at a hotel and face the option of getting scalped for RM40 to let them park your motor in front of the hotel (of which there were dozens scrapping to get their cars at the end of the evening) - nah… not me. Don't waste my time. Not at these prices. You can Pith Helmet off.

Photos by Jan Shaw and Kit Ong pinched from Facebook with thanks :D

Freshly Brewed Coffee or Tea
Posted by Brian Mack at 12:59 AM