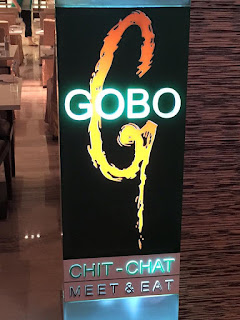 Probably best to say at the outset that I did not enjoy this wine dinner at all. Partly it was the mood with which I went into the dining room as a result of the hugely bad parking instructions at the Traders Hotel Car Park. The other part was the pretty looking but ultimately bland food and the mediocre wines on show along with being annoyingly deafened for most of the night by a Jazz trio parked next to our table (which after several admonitions to the manager eventually got moved to another part of the bar). I had a full blown report and rant on this wine dinner all ready, but ultimately decided I couldn't really be bothered to write it up. Suffice to say that the food was visually pretty but tastewise pretty bland and the wines were somewhat thin and a bit reedy to my taste. Sous Chef Kelvin Bin Kilin has clear skills in presentation but not sure if he might be required to keep the food "safe" in taste terms to satisfy the perceived expectations of Traders Hotel guests. Soup and dessert were okay, bread was dry, beef was ordinary, rest was pretty unmemorable. No hwyl in the food.

I have memories of Yering Station reds as quite vibrant and Xanadu Cabernet as bold in character. Not on these expressions. Not sure if the harvest was a bit grim but the offerings of both did not impress enough to buy. Not that there appeared to be much effort by the Luen Heng people in pushing the wines to us punters, which was both refreshing and yet somewhat strangely unsettling at the same time. Talking with the winery rep, it was revealed that both Yering Station and Xanadu had been taken over by the Rathbone Wine Group. Seems this is a family enterprise keen to grow its stable of high caliber wineries brands. All well and good, but occasionally the result in these circumstances is that there is less incentive for the wineries to maintain absolute top end standard and can slowly slip down the rankings. It's like the vines themselves - the best grapes come from those vines that have to fight to find water and less fight means less taste. Cloudy Bay is a useful case in point after it got bought over by LVMH - its SB has become more and more ordinary over the years and seems to be getting lower and lower in price as it needs to compete with a slew of competitors able to produce wines full of character at similar prices. Including personal favourite Kevin Judd of Greywacke and the erstwhile winemaker at Cloudy Bay. Needing to remain competitive is a state of nature. Total Darwin. Hopefully the Rathbone side can stay out of the way and let the winemakers speak for the grapes and the terroir. The Wine Rep assured that the winemakers were being retained by the wineries. Time will tell - maybe it was a bad year for the grapes and Mr Wine Rep also did not seem to remember. They all seemed to be having a jolly time of things whilst I felt the whole evening was pretty much a fail on most counts. Reading one other glowing and rapturous report on the dinner, I wondered if we were at the same event. Maybe I was just too cheesed to enjoy it. There you go - it's always perception coloured by mood, isn't it?

It all made for an evening to forget and definitely one not to repeat. Though on the positive side all the hotel staff I encountered on this particular food odyssey were pretty sterling in their various attempts to help and assist. The Hotel Door Staff in particular were excellent as was the restaurant floor manager and the Gobo Bar staff were efficient and unobtrusive and acceded to most of my requests - very well done here. And the company was good fun as always with Jan and Barry and Chris and Sanjeev - the photos were all taken by Jan and reproduced with kind permission and grateful thanks. I was in too bad a mood to take any.

Traders is part of the ShangriLa chain, isn't it?   Hmmmm….