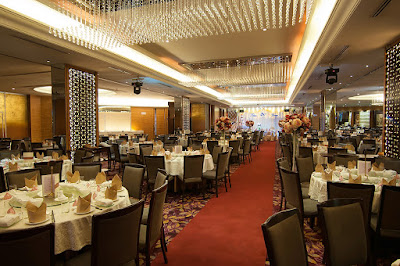 June 23rd 2015 - Quick note on the Grand Imperial Palace Restaurant in Hartamas Shopping Centre. Went there for dinner with a group of Lenglui's old kaki from the Line Dance days (Line as in Yeehah Bootscoot and Scuff as opposed to the dum-chang dum-chang Lion Dance you see at Chinese New Year time). It was a triple birthday and they're usually good fun.

The Grand Imperial has been around since 2008, now having five operations at outlets in BSC, USJ City Mall, 1 Utama, Casa Klang and the one where we were in Hartamas Shopping Centre. Their website says they also have an outlet in London - very international. Looking back, it is only the one in Klang that is missing for the full set to have been sampled - the others seemed to have come and gone in one off visits with occasional foodie buffs (BSC, 1 Utama) or wine dinners (USJ). Which is probably why as the food came out it all looked a shade familiar. So it goes. 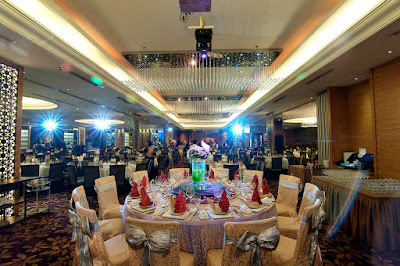 The HSC venue was like the Tardis from Doctor Who days - small door that opens out into a palatial system of private rooms and main hall. Most of the private rooms looked to have been booked and there was a smattering of people in the main hall. Quite nicely opulent and tastefully furnished ambience - not so "jang" as some of the larger Chinese restaurants can sometimes be. It is indeed quite Grand and does give a good sense of occasion. 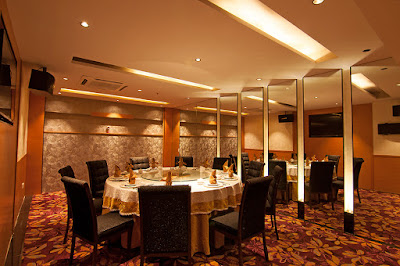 We got ushered into one of the private rooms with the ubiquitous karaoke system which had been switched to "off" for the night. Glasses were waiting at a side bar with the bottles brought for the occasion and a charming wine chap was ready to help with the pouring. I took command and retrieved the reds from the ice bucket and parked the whites therein. Sometimes they just need a bit of training, though my guess was that one of the guests had told him to park the red in the ice. Recognising this, I selected the less complex of the reds brought (turned out to be an Australian Merlot and which would not ultimately get drunk) and left it to freeze with the whites. Sadly one of the whites brought by Datuk proved undrinkable - it was a fancy named French thing from 2006 that must have been parked in his fridge for years. It was dark in the glass and rough as a robber's dog on the nose. He was quite miffed, saying it was supposed to be a good one. It was a shame, since he does usually bring decent wines. This particular one had the varietal name prominently displayed on the label. Conventional wisdom suggests that any Frenchie who does this should set off the alarm bells, since for this to be done often suggests marketing over the degree of care about what went into the bottle and how. But that's only the CW talking - it is only the uncork that reveals the truth.

Menu for the night was

Drinks were Chilean SB, Argentinian Chardonnay (both supermarket), a 2011 Argento Malbec Reserve (also Argentina, seen in supermarkets) and a delightful Pinot from Monterey County in California which I should have taken a photo of as I now can't find the name of it in any of the lists. Lovely and light as an aperitif, went belter with most of the food. Darn. Bit embarrassed to ask the company what it was since it was me that supped most of it. Charmer of a wine. I decided to go straight for the red because recent dinners suggest wine friends are happy to chug more white. So the less white for me means the more for the friends. And that Monterey Pinot was a rare tempting treat.

In all, the food was not bad, though Lenglui found it all a bit ordinary and lacking taste compared to our Marco Polo. But looking back, I think perhaps this might the style that the Imperial Group is going for - not supercharging dishes with the spice or soy (like what the restaurants in the Noble House group seem to do) but keeping it simple and understated to let the food show itself off. Which for me it all did quite nicely. We both liked the soup, the Garoupa was perfectly steamed and the Lotus Root and celery and hazelnut made for a sourish crunchy mouthful with nut texture contrasting with the celery and lotus root starch and competing for dominance. The Pork Noodle was fair but the Total Star was the Baked Spare Rib. I remembered that the supplier to the restaurant is the same chap we buy our ribs from (Oscar from Spanish Passion) so that made them Iberico. They were darling - roasted to melting perfection and with a sauce that had sweet, smoke, zip and goo but without that overpowering gunk and unctuous fire you can sometimes get from the bottle. Totally delightful and wonderful balance. We had been given a pair of plastic disposable gloves with which to eat the ribs - these got licked and sucked completely dry. The company was very kind to let me have the remaining rib on the table. Absolute cracker with the Pinot, and tamed the Malbec tannins nicely to let some crisp dark plum come through.

Total bill was RM1250 for eleven people after service and GST charges and no corkage appeared to have been charged. Service was pleasant and efficient, with food being shown for the obligatory photo before being partitioned into individual servings for everyone. Also got fresh glasses for the red and also got offered for the change of white. Impressed. One of the group had brought a birthday cake for the obligatory candle blowing and photo. Not bad - coffee flavour though still that sickly sweet icing around the rim that suggested Secret Recipe. Also, table neighbour had started coughing a bit and, being a total germophobe, I decided against eating the surface bits. Doctor Gan once told us that the fastest way to get infected is from hand to food to mouth. Which is why the Japanese don't like to shake hands - perfect germ transmission system. I usually try and wash the hands after a handshake - or at least splash a bit of water from a glass on the table if a visit to a bathroom is cannot. Lenglui also carries a little disinfectant spray bottle filled with Vodka. Another tip from Dr Gan - alcohol is the best disinfectant - not greasy, dries quickly and no smell. Our yearly infections have definitely gone down.

In sum, I'd go back for the ribs in a second. Fish was okay but not in the Soon Hock class of sweetness and texture, but that was menu choice rather than restaurant preparation. On this showing they'd do a standout job with any fish. The pork in the noodles felt a bit fat and sweet, though the desserts were lovely - ice cool, fruity crunch and a lightly sweet syrup. Beancurd was good though the crabstick felt a bit rubbery. Even so, for a group dinner the Grand Imperial makes a good choice. Have to get the IWFS to consider because those ribs were really off the map.

Parking - there is a valet service, though if you go through the Car Parking gate just before the restaurant entrance and park near this gate you can walk back through and straight into the place. Only downside is trying to pay for your parking when you leave - the nearest machine was "rosak" and there were a number of people ambling around trying to locate another. Not the thing you want to be doing in a hot and stuffy car park after a good meal. We were lucky - HSC is a regular Saturday destination for massage and groceries so we were able to drive to where we knew the next one was located. Now if the management can get their fricking machines to take the new RM1 and RM5 notes it might survive the beating and kicking it will get next time it refuses to take the money. Though you can use the Touch N Go Card to get in. Life in Malaysia, eh?