UPDATE May 2016 - Enfin is now at Menara Hap Seng on Jalan P Ramlee in Kuala Lumpur. Far better location for what James is offering. Have yet to visit, hopefully soon.


This was a wine dinner organized by good friend Candy Mah of Cave and Cellar.  It was held at a restaurant new to us - the Enfin Brasserie at the Oasis in Ara Damansara. We were to have a selection from the Giesen range of wines, some of which Enfin was featuring as their house wine and wine for the season. Cave and Cellar always organise a good wine dinner and the wines had got our resident Kiwi very excited - the reviews he emailed on the Giesen range were glowing. We had also got YC and neighbours Nenad and Ania to sign up. In the end, we had a table of ten all sat together. Good night in prospect.

Couldn't find much info on the place on the web. Chef James in the Enfin Facebook page says the restaurant is the latest addition to the Min Food Group restaurant family. The food is completely and quintessentially French though the chefs all hail from Asia.

It took almost two hours to get there. We had left pretty much on the dot at 5pm from the office, anticipating bad traffic on a Friday night. But it was a nightmare. They are building extensions to the LRT, looking to squeeze about eight lanes across three slip roads into two. Desperate. We parked up and found the restaurant, though we had to walk through a burger kind of place and up some stairs to get there. Though a bit early, we were greeted with a warm welcome from Candy and a cold glass of the Giesen Pinot Gris. Ahhhhhhhhhh…. The Pinot Gris was nicely sweet, though better when colder.

The notes spoke of an "Aromatic and elegant wine with spicy floral notes and aromas of poached pear, almond, dry spice with vanilla pod. The palate is intense with tropical stone fruit flavours and a hint of warm brioche. Texturally the wine is supple with luscious fruit sweetness yet also powerful with some alcohol warmth along with a ripe structure which ensures a finish with persistent flavour." We found it florally fragrant with spice notes, crisply sweet and chilled. It made for a pleasant aperitif, though needed to remain cold to prevent the sugar getting a bit cloying. It would also end up as the nightcap and matching wine for the dessert.

Talking with the very affable Chef James Won, it transpires he is a Krug Chef and if I heard right he sets the menus for the Krug Restaurants around South East Asia. There are six Krug Rooms across the globe and the Enfin is apparently the first Krug Restaurant in South East Asia. There is also a Krug Garden above the Enfin which can cater for fourteen guests to allow for a more herbaceous alfresco experience with the King of Champagnes. Chef is a fan of nature's flavours.

Chef James proved a wonderful Master of Ceremonies for the night. Hugely passionate about pairing and matching, he led us through a range of experiences where food and glasses altered the experience of the wines. His time with giants such as Ducasse and Bocuse have clearly inspired him in his mission of educating palates. There was a small comment that perhaps he was guiding us a bit too much in what we should be experiencing, but that felt a shade mean. 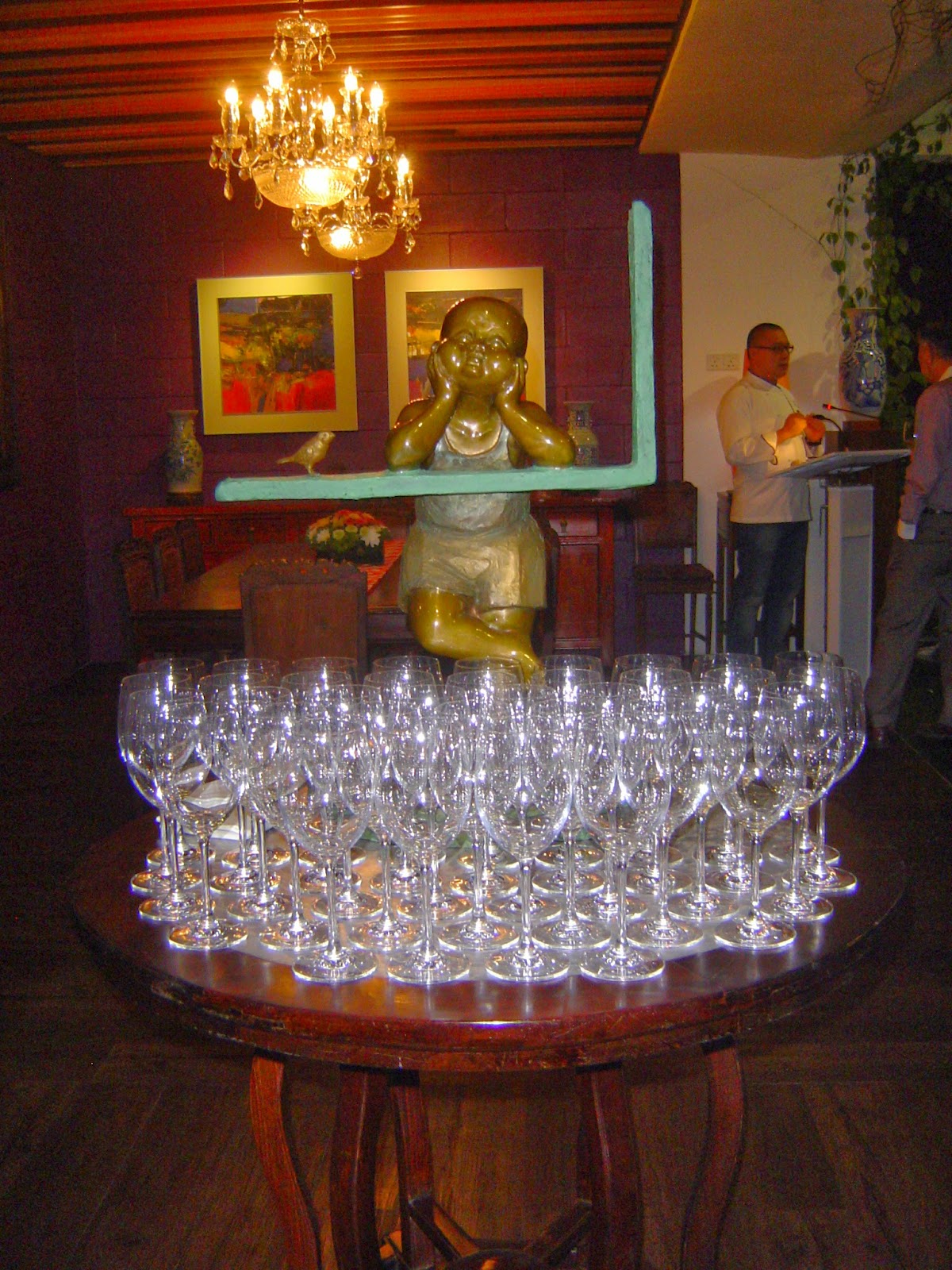 Our Amuse Bouche was a Macaroon Sandwich with Salmon Roe, Chives and Ikura which proved a blitzer combo of sugar, salt, pepper and fish savoury on the tongue as a result of the Ikura. The Macaroon included some dehydrated Orange Peel. Absolutely wonderful Macaroon - light, crunch, whisper, evaporate. It was a crackerjack with the Pinot Gris, the sweetness undercutting the savoury and sugar Macaroon a treat. Good start. showed off the flint and spritz of the Brothers and gave a smoother character to express.

The 2011 Giesen "The Brothers" Sauvignon Blanc that quickly followed had a lovely crisp balance about it with a hint of oak somewhere, and clearly requiring some shellfish to set it off. Nicely biting and bracing, it seemed to get less acidic as it got warmer, so perhaps an indication to drink it quickly. The notes talked about "purity, focus, elegance and concentration… cut grass and dried herb blending with grapefruit, guava and flinty river stone." Equally, the palate "has a juicy texture and lovely pure acidity. This wraps around concentrated flavours of elderflower, lemon zest and crushed herbs. The finish is minerally, refined and persistent." The 2013 got RP 86 and the 2010 got RP 90.

The scallop that followed was a big zap of pepper texture which was tamed by the SB but it also amplified its acidity and again brought out its minerality. The accompanying tomato was brilliant, one of the freshest I have tasted for a long time. It was sweet, crisp, had crunch and zap and blended wonderfully with the carbo couscous. Great dish which showed off the flint and spritz of the Brothers and gave it a somewhat smoother character in expression.

The 2010 Giesen "The August 1888" Sauvignon Blanc has a rich, opulent nose with a brilliantly complex mouth of apricot, smoke, cinnamon and persimmon. The notes suggest "ripe stone-fruit is to the fore with peach and nectarine leading the way. Aromas of herbs, lemongrass and nettles give the nose a lift and combine with dry spice, vanilla bean and a creamy complexity. Time on lees and fruit concentration are big influences on the palate with a luscious, creamy fruit and flavours of mandarin  and ripe gooseberry. The palate is well structured with a touch of phenolics and drying acidity ensuring a powerful assertive wine."  2013 got RP 90 and 2011 got RP92+

On its own, the salmon was lovely. It had been perfectly cooked to 70% with nice oily fat coming through and wonderfully set off by the crispy caramelized and honey crust of the Skin Brulee. Chef talked about the Omega Oil in Salmon giving a hint of shellfish in the mouth. It gave the wine a lean feel which let the food hit the roof of the mouth like a sandy salty sea-storm. The Bouillabaisse broth was equally brilliant but our requests for bread to sop it up were refused by chef, saying it would be too much food and would spoil his upcoming delights. Okay. The customer is always right except when the chef says he or she is wrong. Works for me.

The Giesen Estate Pinot Noir seemed to have an odd balance of acid over fruit, but would prove very versatile with the duck and other food. The Estate Pinot notes say "Dense, plum red in colour. The nose has vibrant red fruit aromas with a spicy earthy complexity. Intense fruit, supple texture and fine grained tannin produce an elegant palate with a touch of sweet oak." It was quite a simple and well made Pinot, not too overpowering in any of the departments, a good pairing wine. But not much more at this point.

With the dish on the table, Chef said we should try the sauce first then sip, then the sauce and potato and sip, and then the duck and sip, and then all three together and sip. Very enlightening - potato and sauce brought out a sarsaparilla note on the wine whilst the pairing with the velvet duck made the throat sing a song of spice and wonder. Firm and full meat, the duck and Pinot were stellar. And a lot of it too - it was a big-ass chunk of duck on the plate. Someone said it should have been named Porterhouse Duck. Agreed.

The 2011 Giesen "The Brothers" Pinot Noir was supposed to be the big brother and the business for the night. The notes say "Alluring aromas of blackberry, plum, five spice and clove with notes of brambly forest floor and warm freshly turned earth. The palate is firm with well structured tight tannin yet (is) supple with fleshy fruit and a touch of oak spice. A wine that will reward cellaring." Got 88pt from RP.

My palate was clearly giving out, since my notes say the PN was lovely on its own with superb balance, good complexity and with a lot going on in the wine. Coming on like a sweet cherry at first, it then hits you with a whack of strawberry ice lollipop. Not the most revealing or instructive of notes. Too much SB and PG at the start of the night. I bought a bottle so when it gets cracked will update the note here.

The lamb was not over-seasoned, and neither were the veggies. It was roasted like my mother used to roast it and slightly cooled so that the fat got solid. There seemed to be a lot of fat in the meat, though the ensemble with the Fennel and Bourguignon sauce was very tasty. Some also said it felt a bit rare, though mine was well cooked. A fair match with the wine, though the wine's complexity threatened to overpower the food on occasion. Not sure if I heard right but my notes say the lamb was cooked in Duck Fat, which would be new. It cut the Pinot and let the pepper and fruit come through.

Dessert was another Macaroon which was beautifully sweet and crunchy excellent with wonderful sweet citrus lemon. For me it didn't really go with the Pinot Gris, which had its own high sweetness and essentially became a sugar bomb when paired together.

Service of the wines was generally brisk and generous. The food mostly came out at the same time so no one was left waiting for others to get served. Both the wines and the restaurant were very good, and no one could really complain at the value for money or the quality thereof. We were all pretty merry as evidenced by a sing song at the end of the night and a raucous drive home with neighbours Nenad and Ania and their visiting friend Rene.  As a result, it all came across as a well organized and hugely successful event. Both the wines and the restaurant were very good. Candy had marked the Giesen on special for the night and I shared a mixed case of the evening's offerings with friend YC.

I think everyone enjoyed the food and the wines and the entertaining palate education offered by Chef James. I think I understand the point someone made of "maybe a bit too much education" but having been a lecturer I also understand mixed abilities and levels of experience in a classroom - some know far more than others and it is always safe to begin with the lowest common denominator. And with a table of IWFS foodies to deal with, Chef James did very well. I learnt a lot and much more compared to many other wine dinners attended. Will definitely consider attending any future events with Chef James (indeed, will be attending an upcoming Lanson Champagne dinner, again organized by Cave and Cellar and already sold out). The only real downside is the nightmare traffic needed to be battled to get to the Enfin. Ah, the things we endure for love…