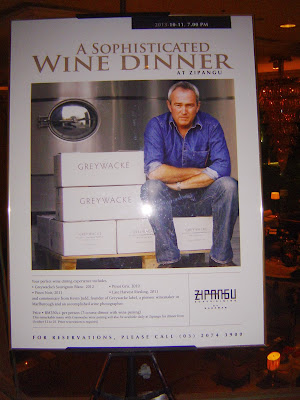 Regular readers (?) will know that I have issues with the Shangri-La F&B given recent visits to their outlets.  So it was with a hint of reluctance and trepidation that we accepted a wine dinner at the hotel.

In fairness it was an extremely small hint because it was a very difficult wine dinner to say no to. The wines of independent maker Greywacke were being paired with Japanese cuisine at the Shang's Zipangu restaurant. In moons past, we had spent a lot of time eating at Zipangu in the days when the Shangri-La card was well worth the wallet space. It was very, very good, especially with a bottle of the low end Sake to wash down the daintily sliced sashimi and other delicacies the chefs so beautifully prepared. When the fees went up and the benefits went down, the card left the wallet and Zipangu fell off the map. It had also got a bit ordinary (circa 2006) in comparison to other rising Japanese restaurant stars (both KL and PJ Hilton remain regular destinations, as does Kame Sushi in Sri Hartamas). So it was a good opportunity to revisit and rake over old memories.

Winewise, we had been introduced to the Greywacke (pronounced "Grey-wackee") SB by The Kiwi at a previous pairing with Nyonya style food, where we also had a Oahu 2011 Pinot Gris. The bracing zip and fruit of the SB contrasted with the crunchy sweet of the PG and cut the spice on the tongue from a fiery roar to a pleasing tingle across a range of spicy dishes. The Kiwi had been hugely enthusiastic about the Greywacke.  He had told us then that Greywacke Winemaker Kevin Judd was the brains and craft behind Cloudy Bay in its pre- and post-iconic days who had left CB in 2009 to set up his own presumably more independent operation. In pretty short time, we had become converts.

Arriving at the venue after a swift one-for-one at Arthur's Bar, a glass of the nicely chilled 2012 SB was placed in hand by Mr Gough of Geovinum, Greywacke's rep in Malaysia. Good balance, sweet passion fruit with a crisp and crunchy citrus, a little less racy than the 2011 we'd had at a previous dinner but no matter. Steely minerality and feeling like waterfalls on rocks as it swooshed across the teeth and down the gullet. The Kiwi, the Nyonya and Winedaddy were our table guests for the evening and we spent a pleasant fifteen minutes chugging on the SB and chatting. Got introduced to winemaker Kevin and wife Katrina. Clearly serious about his craft though also clearly preferring to stay out of the limelight, he has an understated sense of humour. Being Kiwi, conversation naturally turned to the incredible turnaround by the USA over New Zealand in the Americas Cup. Eight-one down they came back to win Nine-Eight. Unbelievable. I suspect a Malaysian bookie. They can be extremely persuasive. Allegedly.

The SB was a surprising double plus match with the salmon and avocado. The acid minerality was undercut by the wasabi and avocado which let the acidity cut through the unbelievably fresh salmon sashimi like a samurai through one of Kurosawa's bad guys. The SB also transformed the tempura from amazing to through the roof. Imagine the freshest of juicy prawn dunked in the lightest of batter and quickly deep fried in some high grade oil. On its own it was like a whisper on the tongue until the bite released the most succulent of crunches. With the wine, the batter softened the acidity and let some wonderful floral notes sit on top of the citrus. Match of the evening.

The PG 2010 was poured and showed a honeyed vanilla nose and spicy pear and rambutan on the palate, but came across as ligh tin acidity and ultimately unctuous in the mouth and finish. Kind of like a Black Forest German Riesling only lighter in texture. The low acidity made it a brilliant match for the full textured yellowtail. The rambutan mouth lent a pleasant fruit foundation to the magnificent fish, but ultimately felt a shade unsatisfying. Same with the braised chcken and radish - good enough match but a shade more acidity was needed for the thing to transcend. It was good to have some of the SB on the table, though - did excellent service in cleansing the throat in the absence of Green Tea. The radish was perfect texture of soft outer and vegetal crisp inner and the delicately seasoned and tender chicken made for another set of full marks to the chef. As said, the lack of acidity made for good, albeit somewhat gunky and sweet, matches with the dishes and the chicken and radish really brought out the pear in the PG. Got a hint of oatmeal biscuit as well with the radish. Interestingly, the SB took the acidic edge off the Radish and made for a softer textured bite. This is such a versatile wine.

Kevin Judd later shared that 2010 vintage had low acidity. One of those years. Maybe need to drink up with Thai style salad dishes and lemongrass dressing to give the PG some assistance in the mouth.

On to the 2011 Pinot Noir which had good crisp acidity and light cherry fruit which gained a silky texture when slightly warmed. Light in texture and long in finish, it seemed to lack a bit of body especially when confronted with the tender rich Wagyu. On its own, the PN felt in the middle - neither light enough to take the breath away nor full enough to satisy. However, a second round with the beef and mushroom gave a textured crispy bite of meat and fibre which the acid and cherry permeated for a rich textured slightly sweet and slightly sour mouthful. Ah, we live for moments like this. Texture and taste heaven.

Having the Late Harvest Riesling for the Sushi selection was absolutely spot on. Both the Unagi and the Foie Gras were outstanding with this crispily sweet dessert wine and its mouth exploding nectarine knockout. The full-on gunky texture of the wine seared the eel and foie gras with a sufficiently sugary coat to soften the purines without sacrificing too much of its sweet kick to the tongue. Superb.

The closing Japanese white peach perfectly poached in its juices on its own was a delight. And whilst you would have thought the dessert would have been a no-brainer match, for some reason they didn't really connect. Perhaps the remnants of the Foie Gras were still stuck on the palate and got in the way. Or maybe the soft easy peach didn't have enough fibre for the wine to get a hold of.

Ultimately, a brilliant evening of great food and tasty wines which made the company and the craique so very very good. The Shang has gone some way to redeeming itself with this outing, though we did get a special deal through the Kiwi to get access to this dinner. The food was outstanding, some of the best sashimi tasted in KL for a while - chef is a star. The wines equally shone in the company of such excellent cuisine. A wine dinner for the ages and a standard to match. Well done Zipangu. Let's hope the Shang Ballroom and other F&B outlets will similarly delight when the occasion demands our presence.

The Greywacke SB 2012 notes say it is "A vibrant combination of fresh basil and spicy tomato leaves, tossed with tangy nashi pear and mandarin, sprinkled with a little lemon zest. A highly perfumed wine with blossom-like floral aromas and a subtle flintiness that alludes to an underlying core of minerality. A mouth-watering, refreshing style with a deliciously crisp, yet luscious finish."  RM135 from Geovinum Wines in Malaysia.

The website notes on the 2011 PG talk about "a bowl of freshly picked stone fruit – fleshy white peaches, plump golden apricots and sun-ripened nectarines – a wine with rich, ripe aromas balanced by a floral purity. The palate is luscious and textural, reminiscent of homemade apple pie with rich buttery pastry and a faint hint of cinnamon. This is a wine with considerable depth and richness."

The 2011 PN is said to be "a virtual compote loaded with black plums, boysenberries and redcurrants, lightly infused with cinnamon and cloves. An intensely perfumed Marlborough pinot with fruit sweetness, floral highlights and a distinct smoky fragrance. The full-flavoured palate has dark fruit richness with great length and freshness – finishing with a hint of Middle Eastern spice."

The 2011 LHR notes say it is "a wine of intense aromatics – exotic honeysuckle blossom, candied lemon and vanilla custard, infused with a hint of cloves. The luscious palate has a marmalade-like combination of lemons and limes mingled with the richness of honeyed apricots and a dollop of crème caramel. Silky, succulent and harmonious – finishing with a lively citrusy crispness."