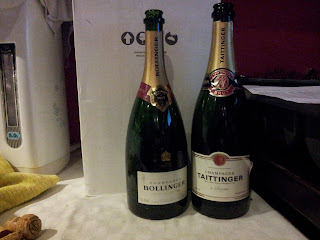 The IWFS regularly holds it committee meetings at the Vintry in Damansara for a couple of reaons. One: they always set aside a table with glasses and cheeses and fruit for us; and two: it's usually not too difficult to get to and park reasonably close to it at 6pm on a Thursday. Our wine sub committee often holds its tastings for prospective purchases there for the same reasons, with the added fact that the staff are very accommodative in changing glasses and chilling wines.

Whilst the wine sub comm often ends up having dinner there to try and finish off the wines, the main committee often leaves straight after the meet to get to dinner dates elsewhere with nearest and dearests or business entertainment. So it was a pleasant surprise that President Rajan decided to organise a Thank You dinner for IWFS KL Committee 2012-13 and partners at the Vintry following our penultimate meeting for the year. Everyone was to bring a bottle of something nice for the dinner and simply enjoy the food and the company. 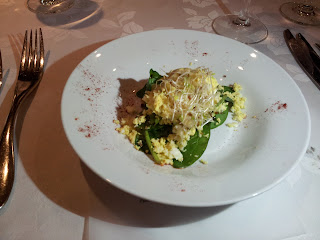 Starting off the night with two bottles of fizz. The Bollinger was most pleasant as it should have been though the Taittinger was equally good - lemon biscuit and apple bubbles though slightly sweet on the back end. The Bolly was the business though - all light biscuit, firm and full in the mouth with the cleanest of finishes. Everyone should be able to drink the Bolly sometime. Me, sometimes I wonder how it all got so good, but then again to do so sometimes is to tempt fate into slapping you with something unexpected and nasty to take the wind from the sails. Need to be careful with the fates.

Starting off with Baby Spinach, Ricotta and Egg Crumble on Coriander Bagel Crostini drizzled with Hollandaise. This came across as a textural eggy delight undercut with smoky woodchip crunch, though the spinach tasted more of Basil to me. May have been the wine. Two whites got chugged - a 2010 Macon Uchizy from Lafon and a most delightful 2010 Heylesbury Chardonnay from Vasse Felix in the Margaret River, drinking like a French burgundy though with slightly more body and boldness. More a friendly whack in the chest rather than the soothing fruity caress of the Macon on the throat. 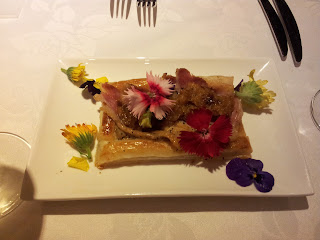 Next out was the Smoked Duck Breast & Fruit Mince Puff Pastry Tart with Japanese Cucumber and Red Radish. This was interesting and wonderfully filling - the puff pastry was firm and crisp though with enough moisture to render it meltable on the mouth. The pairing of the sweetly spicy fruit mince with the firm and lean duck breast was magnificent - the sour purine in the duck matched perfectly the sweetly spicy mince creating a wonderful tongue tickling delight. It came served with flowertops which were a light bite delight at the back of the palate. Must be how cows and sheep feel when grazing on the hills prior to their visit to the butcher. We were on to the reds by now. We started with a Cloudy Bay 2010 Pinot Noir, then moved on to 2010 Almaviva. Next up was a 1997 Leoville Barton and we finished off with a 2005 Barolo from Vietti in the Castiglione region. Each naturally had their own character, with the Pinot proving surprisingly friendly though still spicy and firm. The Almaviva had lovely body and fruit, with big blackcurrant and cherry and damson and a luscious velvet finish. The Leoville was naturally the business, all structure and smooth lean green pepper and cassis with superb balance and sleek on the finish. I can't really remember the Barolo, but it got finished off so it must have been good.

Next up was Tunisian Style Harissa Lamb Chops with Onion Chutney, served with Roasted Aubergine and Mint Tomato Salad. The dictionary on the Mac says that Tunisian Harissa is a hot sauce or paste used in North African cuisine, made from chili peppers, paprika and olive oil. Usually pounded in a pestle, it had been spread over the lamb and looked like it had been roasted. The Almaviva as a Cab Sauv was a natural pair for the lamb and as the song from Grease goes,  they went together like rama lama lama lama ding dong. Leo was a bit firm for the lamb, though the Barolo tamed it nicely. 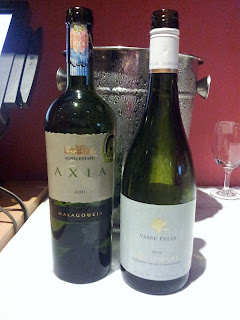 The lamb was beautifully tender and sweet and the Harissa did…. okay. It was not overly hot and peppery, and lent a nicely spiced glaze over the meat. The aubergine was very good though the salad got passed over. The tomatoes somehow looked a bit sad, covered in some brown dressing as they had been. Killed their crunch a bit, as memory serves. Though the memory does not always serve well - we were all pretty well gone on the wine and conversation by this time. David had shared a joke about getting an erection by whistling, so all of us schoolboys started whistling at Mr Dingle much to the chagrin and bemusement of the ladies who missed the joke.

Did not get to try the Pan Fried Chermoula Sea Bass with Caper and Oregano Cream served with Heirloom Tomato and Feta Salad, though everyone said it was very good.

The Peach, Mango and Passion Fruit Crumble with Vanilla Ice Cream was belter. Cold creamy goo melting over sweet soft fruit crunch is as good a taste of sugary heaven as you can get. Though not as tongue busting as the fine dining establishments, this would be worth a return visit. The chef was up from Singapore for the night and had done nice work. It had that standard Vintry solid sustenance and substantive good taste without that was slightly toward the fine dine but not enough of the touch to really make it so. Which is all right. No need to try and pretend you're something you're not. Solid food at fair price with reasonably priced wines - that's the Vintry edge for me. 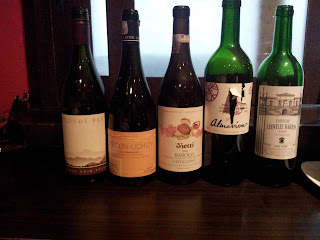 In all, a lovely evening of wine food and caramaderie with friends who love the wine and the food and the company. One of those merry and mellow ones rather than a full blown booze up. Should have more.
Posted by Brian Mack at 12:18 AM